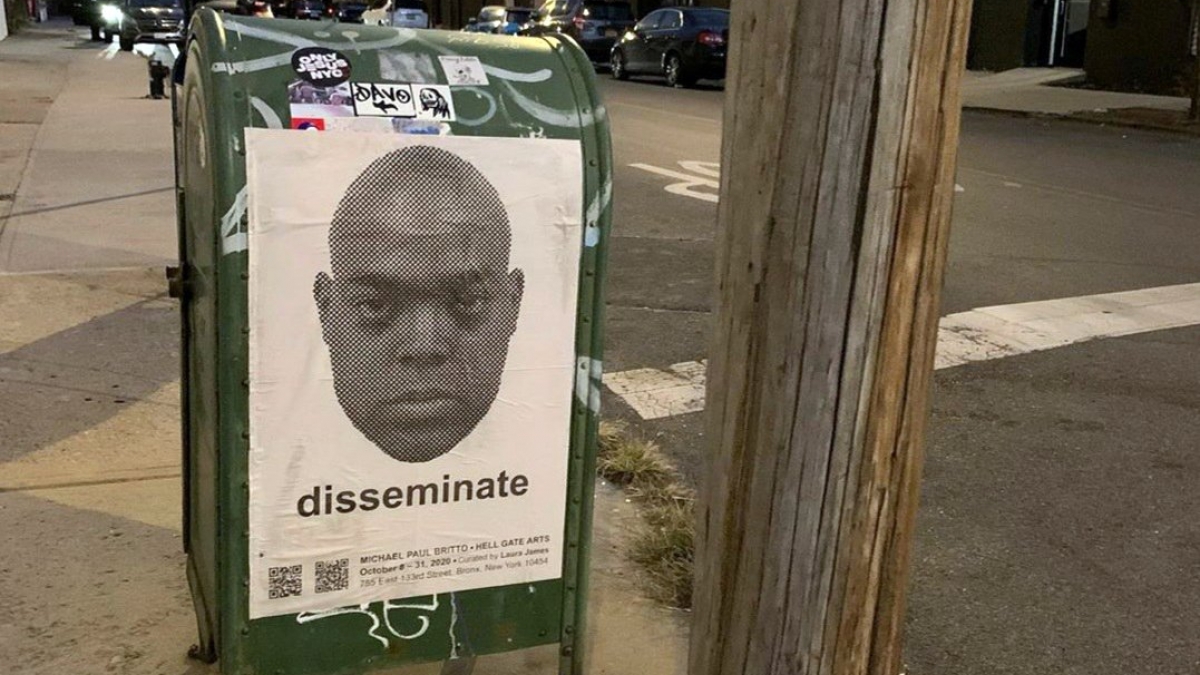 Read an article about this show by Zach Frater on BX200.COM

I first saw Michael Paul Britto’s work in 2015 at Momenta Art in Bushwick, in a show aptly titled ‘Shock and Awe.’ Between the looped video of a black man and a white man taking turns slapping one another, and a half pint vodka bottled filled with A White Woman’s Tears, I was both shocked and awed. And angry. Looking around at the hipster Bushwick crowd I couldn’t help feeling Britto was exposing us, Black people. Irrational, maybe, that initial reaction passed and I saw the work for what it was, truth.

Five years later, Mike’s constant themes of race, class and police brutality in America continue to be current events. In disseminate, Britto stretches out. The exhibit consists of video mapping, collage, and participatory sculpture. One such piece, More of Us, Less of Them, pays homage to murdered Florida teen Trayvon Martin and political artist Felix Gonzalez-Torres. It invites visitors to the exhibit to bring rainbow colored Skittles to add to a central pile of special-edition white colored Skittles.

The exhibition also features a video mapping piece showing a dozen police shootings on a 10 min loop superimposed over black bodies. More of Us, Less of Them is meant to imply there are more so-called minorities than white people, and the police video is intended to be menacing. In order to reach Britto’s stated goal to have visitors ‘feel embodied empathy,’ we will be asked to leave our comfort zones.

Born some 50 years ago in East NY, Brooklyn, Britto’s family moved to the newly built middle-class housing development, Starret City when he was a young child. After attending private religious schools, he went to HS in Canarsie, then a predominantly Italian neighborhood. Britto’s youth was punctuated by daily run-ins with racist classmates who would chase him home (causing him to hide out under cars on more than one occasion). At home, Britto had the added burden of having parents who struggled with substance abuse, and he was also ostracized by black folk who saw him as ‘uppity.’ Perhaps rejection in his community was what allowed Britto to explore alternative venues around New York City as a young person, finding where he fit in and beginning his art practice largely self-taught.

Suspicious of how long Black lives will matter this time, Britto is at once annoyed to think this moment won’t last, but still wanting to be hopeful, and disseminate this work far and wide to capitalize on the fact that, in the wake of the Black Lives Matter movement and continued injustice, people are now looking deeper at the issues he’s devoted his career to. Communicating a sense of danger has always played a part in Britto’s work, and these days when danger is blatantly all around us, this work seems more important than ever.

As a fan of simple imagery that packs a punch, I am honored to help disseminate the clear vision of race man/race artist Michael Paul Britto, as he lets the rest of the people in on our secrets. It might make us uncomfortable but it must be done.